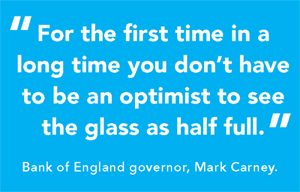 Who knows for certain?
But the signs are more positive.

Even compared with just six months ago, all of the indicators suggest that the outlook for doing business in the UK is increasingly positive.

The British Chambers of Commerce, the Bank of England, the Office of National Statistics and other organisations tell the same story. 2014 looks more positive.

I started printing.com in the last recession. Once it ended, we grew 600% in the following two years – it’s a question of timing as they say.

Last year we teamed up with James Caan’s initiative, the Government funded Start-up Loans Scheme. This enables printing.com to approve start-up loans of up to